Sha’baan: The Month of Muhammad (pbuh)

via Sha’baan: The Month of Muhammad (pbuh)

Why reflect on Isra wal Miraj?

As we approach this time, here is a reminder about this day.

Every event in the Prophet’s (pbuh) life has been an important lesson for us to learn from. Yet many of us take for granted the magnificent life and legacy of the one whose sole mission was to teach mankind the purpose of his life.

The journey of Isra wal Miraj was a miraculous journey in his life that not only brought enormous amounts of blessings to him but also to us. This journey was God Almighty’s wonderful response to the Prophet’s (pbuh) sad state in the year which is commonly known as “The year of great sadness”. This was a particularly sad time for Muhammad (pbuh) as his beloved wife Khadija (RA), who was his strongest supporter had passed away. Soon after, his Uncle Abu Talib passed on and left him completely alone, with no protection against the fierce Tribe of Quraish in Mecca.

With no one by his side…

Who are American Muslims?

Ya Nabi Salaam Alaika (Oh Prophet, may peace be upon you!) 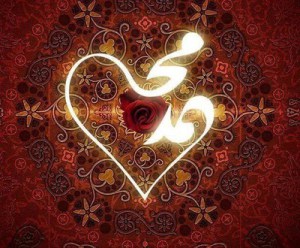 Rabbi Ul Awwal happens to be the month that God Almightly had blessed this earth with the birth of His most beloved and final messenger Muhammad. (peace and blessings be upon him) According to many scholarly narrations, it is believed that the 12th of Rabbi Al Awwal (third month of the Islamic Lunar Calender) may have been the exact date of his actual birthday. There are some differences of opinion on this matter as some believe that it was on a different date; however the important thing to remember is that he was born, he lived, and the world was never the same after he had graced it with his presence. Shall we not remember him and thank God?(Allah)

There are two types of Muslims, those who choose to remember our Prophet (PBUH) him more during this month and recall his stories, sayings and actions through their… 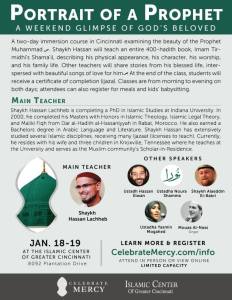 Southern California is about to be blessed once again for the Second time! CelebrateMercy proudly presents two amazing programs.

1.Benefit Dinner with esteemed speakers and light entertainment with nasheeds at the Garden Grove Lawns in a tent under a starry night on December 6th 6:30pm onwards.

2. The second program is the”Portrait of A Prophet”, a study of the Prophet Muhammad’s (S) hadith on his personal traits, characteristics and looks. Dec 5th night(7pm-9:30pm) , Dec 6th (9am to 4pm)  and Dec 7th( 9am-6pm) also at the Garden Grove Mosque upstairs in their musallah room.

Many of you have asked me what “Shama’il Class” is? Please take a few minutes to read up about it. Before you know it, this weekend will be over and you may regret missing the opportunity to get to know God’s Beloved the way He wanted us to know him.
ABOUT THE COURSE

On December 5-7 in Garden Grove, California, Shaykh Hassan Lachheb will lead students on a beautiful journey: an intimate study of our beloved Prophet Muhammad (s). He will read and provide commentary on the famous ‘Shamail of Imam Tirmidhi’, a classical text of nearly 400 hadith describing the Prophet Muhammad (s). Chapters include his physical appearance, his character, how he worshiped, how he spoke, how he ate, and his final moments. Students will be given copies of the text, in Arabic and English; sessions will begin with beautiful songs and poetry by visiting performer like Mouaz Al-Nass. On Sunday, Shaykh Hassan will issue students a formal ijaza: a traditional certification given from teacher to student for over 1,000 years since Imam Tirmidhi. Most importantly, previous students of this course would agree that by the final chapter, you will fall more deeply in love with the Prophet, hopefully painting his Prophetic Portrait in your heart forever.

SHAYKH HASSAN LACHHEB is completing a Ph.D. in Islamic Studies at Indiana University. In 2000, he completed his Masters with Honors in Islamic Theology, Islamic Legal Theory, and Maliki Fiqh from Dar al-Hadith al-Hassaniyyah in Rabat, Morocco. He also earned a Bachelors degree in Arabic Language and Literature. Shaykh Hassan has extensively studied several Islamic disciplines, receiving many Ijazaat (licenses to teach).

Currently, he resides with his wife and three children in Knoxville, Tennessee where he teaches at the University and serves as the Muslim community’s Scholar-in-Residence.

If this interests you then go to www.celebratemercy.com/register to get your seats now.

CelebrateMercy Presents: Hope After Hardship-Lessons from Muhammad’s Migration to Medina 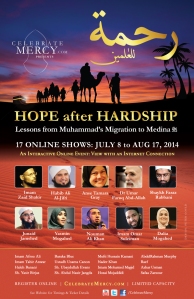 For the Month of July and August and September don’t forget to register for CelebrateMercy’s 8th Webcast which will be broadcasted live on the internet from July10 – Sept 14th of 2014. Check out their flyer and register now so you can watch this live at the times that suit your local time zones. Don’t delay as tickets are selling fast: http://www.celebratemercy.com/register

Rajab: The Month of Allah! 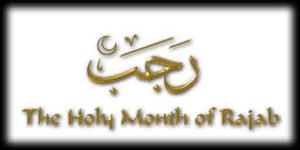 By the bounty and grace of Allah SWT (God), we are embarking upon the eve of one of the four sacred months of the Islamic Lunar Calender- Rajab. The Prophet Muhammad (pbuh) said:

The Messenger of Allah (pbuh) himself would honor it, and when the month entered he would seek its blessings by saying:

“Oh Allah bless us in Rajab and Sha’ban and enable us to reach Ramadan; whosoever fasts a day in the month of Rajab will be granted the great reward of Ridwan (an angel in heaven); the wrath of Allah shall be distanced and the door of Hell shall be closed.”

Salman Al Farsi, (one of the esteemed companions of our Prophet (pbuh) narrated that the Final Messenger of Allah (pbuh) had said that there is a day in the month of Rajab on which if a person fasts and performs ‘qiyam ul layl’ (night vigil), he will receive rewards like a person who fasted for a 100 years. This night is the 27th night and day of Rajab. This is the day when the Messenger of Allah (pbuh), traveled to Jerusalem and then ascended to the highest Heavens until he was in the presence of Allah SWT.

Prayer recommended by our Prophet Muhammad (pbuh) on the first night of Rajab:

He (pbuh) stated, “ The person who performs a two rakah salat (two unit prayer) in the first night of the month of Rajab after his Isha (nightly prayers) and in the first rakah recites Surah al-Fatiha, Surah al- Inshirah and Surah al-Ikhlas (three times) and in the second rakah recites Surah al- Fatiha ,Surah al-Inshirah and Surah Falaq and Nas one time each and then performs the rest of the salat with the Tashahud and Salaam and sends prayers upon the Prophet (pbuh) and his family. All of his or her previous sins will be forgiven and he will be like one who was newly born from his mother’s womb with no sins on his record.”

In essence, the importance of Rajab is for anticipation and the preparation of the Holy month of Ramadan. It is also known as the month of istighfar (repentance). The best way of preparing the heart to receive divine gifts is its purification and repentance.

Some of the scholars have compiled special formulae of isthighfar especially for Rajab. Habib Hasan, the son of Imam Abdullah bin Alawi al-Haddad used to recite the following formula 70 times in congregation immediately after Isha prayers every night in Rajab:

“Rabbi’ ghfir li w’ arhamni wa tub ‘alayya.” (Oh Allah forgive me, have mercy upon me, and grant me repentance.”)

Rajab is the month of planting seeds of worship, in Sha’ban you irrigate it with spiritual devotion and Ramadan should be your harvest.

O Allah! Make the months of Rajab and Sha’ban blessed for us, and let us reach the month of Ramadan (prolong our life up to Ramadan), so that we may benefit from its merits and blessings. Ameen!

Here is my article in ‘Awakenings Middle East Magazine’ about how aromatherapy originated in Islam and how the Prophet (pbuh) loved scents.

Please take a look at this page and help me to fulfill my father’s final wishes that he chose as his favorite cause. May your contribution be a means of blessings in your life eternally and may this benefit my father as well Ameen.